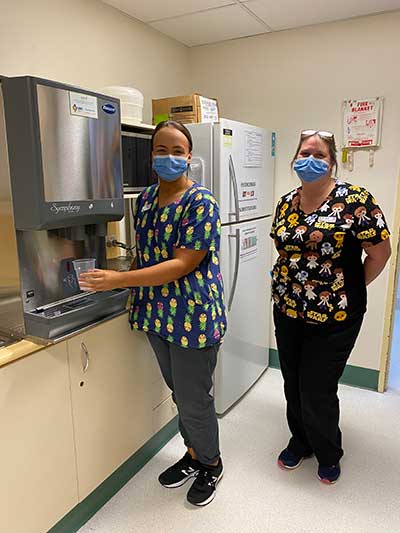 Children's ward Nurse Unit Manager Courtney Lowry and pictured nurses Nicole and Sue were on hand to try out the dispenser.

Beginning in October 2020, the community came together to support a range of online fundraising activities including direct donations, the sale of face masks and a virtual trivia night. The ice and water dispenser was then purchased locally with the funds.

The ice and water dispenser is specifically for the children’s ward, and having access to ice 24 hours a day is key to keeping kids hydrated.

“We're trying to get them to eat and drink, a lot of them will like to suck on ice,” said Courtney Lowry, children’s ward Nurse Unit Manager.

The machine also makes ‘chewable’ ice, another upgrade from the domestic freezer the nurses were previously using – particularly difficult to keep up with demand from an anticipated 6,500 children in a year.

Contributions from Northern suburbs locals and beyond successfully funded an ice and water dispenser for the Northern Hospital children’s ward in a joint initiative by UBC and Northern Health Foundation as part of UBC’s local giving for local health campaign. With the machine sourced locally as well.