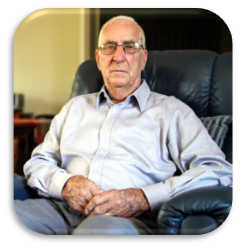 Last November we were saddened to hear that one of the Club’s longest serving members in Mr. Jim Kerr had passed away at the age of 96.

Jim and his brother Fred both joined the Club on 11th December 1960, which means that Fred is now the sole longest serving member.  Jim’s dedicated contribution of time and energy to the Club was beyond the call of any one person.

Jim was awarded Honorary Life Membership of the Club in 1978, and received the Club’s Meritorious Service Award in 2005.

Both Jim and Fred were firemen with the Melbourne Fire Brigade, and their association with the Club began in 1959 when Mr. Bramwell (MFB District Officer) asked them if they would help organise a collection at the St Kilda Junction on Good Friday.

Jim was a Senior Station Officer when he retired from the MFB in 1983, and he was awarded the ‘Chief Fire Officer’s Certificate of Commendation’ for his service to the MFB.

In the years following his retirement Jim continued his volunteer work for the Club.

When the Club moved to its current offices in Tullamarine in March 2006, Jim was invited along with Don Kinsey and Taylah Newcombe to officially open the Office.

Jim retired as a volunteer in 2013. That’s 54 years after his first Good Friday Appeal collection at St Kilda Junction. Wow.

An artilleryman, who had lied about his details to enlist underage, Jim was captured behind enemy lines when an ambush went wrong as the victorious Japanese surged through Malaysia in 1942.

Imprisoned in Changi with the thousands of Allied soldiers captured when Singapore surrendered, he was one of 13,000 Australian prisoners of war shipped to Thailand a year later.

Until his passing Jim was one of the few remaining survivors of World War Two’s Death Railway — a 400km railroad built for Japan’s military across the mountains and jungles of Thailand and Burma, by an army of forced labourers.

Jim was among those many soldiers who were rescued from Changi prison by the victorious soldiers, and returned home in 1946. Within days of arriving home Jim joined the Royal Australian Navy Reserve, and later the Melbourne Fire Brigade. Jim had been known to say “that he just likes uniforms”.

The Club extends its sincere condolences to Jim’s son Stephen, his daughters Debra and Jennifer, his brother Fred, and to his extended family and his many, many friends on the sad loss of a great man.

Rest in Peace Jim, you deserve it …